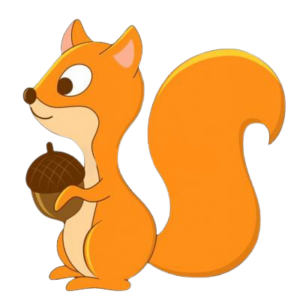 A squirrel joined the service of the King of the Forest, the lion.

He did whatever work was given him, quickly and well

The lion became fond of him and promised to give him a cartload of almonds as pension when he retired.

The squirrel envied the other squirrels in the forest because of their carefree life.

He longed to run up and down trees and leap from branch to branch like them but he could not leave the king’s side and even if he could he had to move with courtly dignity.

He consoled himself with the thought that at the end of his career, he would receive a cartload of almonds, a food that few squirrels got to taste in their lifetime.

“They will envy me then,” he would tell himself.

The squirrel became old and then it was time for him to retire.

The king gave a grand banquet in his honor and at the end of it, presented him with a cartload of almonds as he had promised.

The squirrel had waited so long for this day but when he saw the almonds, he was seized with sadness.

He realized they were of no use to him now

He had lost all his teeth.