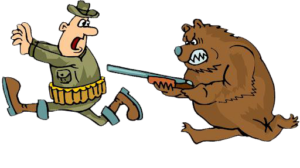 Frank was excited about his new rifle and decided to try bear hunting.

He travels up to Alaska, spots a small brown bear and shoots it.

Right afterwards, there was a tap on his shoulder and he turned around to see a big black bear.

The black bear said, “That was a very bad mistake.

That was my cousin and I’m going to give you two choices either I maul you to death or we have making love.”

After considering briefly, Frank decided to accept the latter alternative.

So the black bear has his way with Frank, Even though he felt sore for two weeks, Frank soon recovered and vowed revenge.

He headed out on another trip back to Alaska where he found the black bear and shot it dead.

Right afterwards, there was another tap on his shoulder this time a huge grizzly bear stood right next to him.

The grizzly said, “That was a big mistake, Frank.

That was my cousin and you’ve got two choices, Either I maul you to death or we have rough make love.”

Again, Frank thought it was better to cooperate with the grizzly bear than be mauled to death.

So the grizzly has his way with Frank.

Although he survived, it took several months before Frank fully recovered.

Now Frank is completely outraged, so he headed back to Alaska and managed to track down the grizzly bear and shoot it.

He felt sweet revenge, but then moments later, there was a tap on his shoulder.

He turned around to find a giant polar bear standing there.

The polar bear looked at him and said, “Admit it Frank, you don’t come here for the hunting do you?