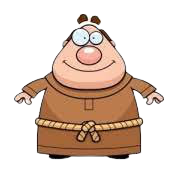 He is in charge of the copying of holy texts. He notices that all of the monks are copying copies of their sacred texts.

He goes to the head monk, “If there is an error in one of the copies, all of the subsequent copies will have the same error.”

The head monk replies, “We have been doing it this way for centuries, but I understand your concern.”

So he heads to the cellar to check all of the main copies against the original texts.

Hours later no-one has seen him and they begin to get worried.

They send a monk to the cellar to check on him.

He finds him sitting and weeping next to their main text.

He asks the head monk, “What’s wrong? What did you find?”

The head monk looks at him with pain in his eyes,