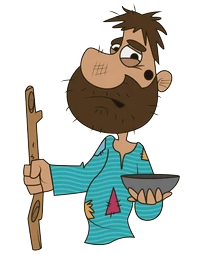 One day a beggar knocked at the door of a house, and when a woman opened the door, asked her for alms.

“I’ve nothing to give you,” said the woman.

“Who are you to refuse alms to this man!” she demanded.

Thus chastened, the daughter-in-law fled to her room.

“All I asked for was a coin to buy food, I did not know she was not the mistress of the house.”

“She’s not!” snapped the woman.

“She had no right to refuse you alms I’m in charge here, and let me tell you something: you’re not getting a money from me!!”

And with that, she slammed the door in the beggar’s face.

A young lady was waiting for her flight