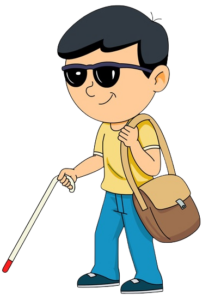 A blind man joins them after a few minutes.

When the bus arrives, they find it overloaded and only the wife and the 9 kids are able to fit on the bus.

After hearing about the predicament, the blind man lets the children get on instead of him.

The wife asks her husband to take their youngest in the baby carriage and walk home.

Since the blind man had been such a gentleman and let the family get on instead of him, the New Yorker decides that he’ll take a detour and walk the blind man home.

As the bus drove off, the two men started to walk while the baby slept.

After a while, the baby woke up from the sound of the blind man’s stick hitting the sidewalk, and started crying.

The father, already irritated from missing the bus, got even more frustrated.

He said, ”Why don’t you put a piece of rubber at the end of your stick? That sound is driving me crazy!”

The blind man replied, ”If you had put rubber at the end of YOUR stick, we’d be riding the bus!”

little boys were lying on stretchers