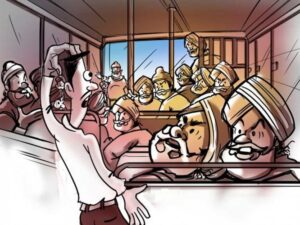 A busload of politicians were driving down a country road when, all of a sudden, the bus ran off the road and crashed into a tree in an old farmer’s field.

The old farmer, after seeing what had happened, went over to investigate

He then dug a hole and buried the politicians.

A few days later the local sheriff came out, saw the crashed bus, and asked the old farmer where all the politicians had gone.

The old farmer said he had buried them.

The sheriff asked the old farmer, “Were they all dead?”

The old farmer replied, “Well, some of them said they weren’t, but you know how them politicians lie.”

Two friends were walking through

little boys were lying on stretchers