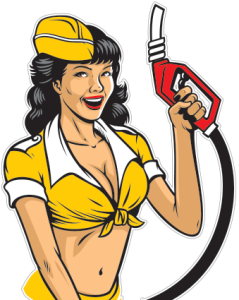 A lady was filling her tank at a gas station, smoking a cigarette, even though all the signs say not to.

The fumes that came out of the gas tank ignited, severely burning her hands.

But it also lit up her arm, too! Instead of rolling on the ground to put it out, she panicked.

She took off running down the street.

A police car was at the intersection where it happened and he tried to stop her to put out her arm, but she just kept running and screaming.

All the officer could think of doing was to shoot her.

This took everyone by surprise.

The officer ran over to her and put the fire out, then called for an ambulance.

When questioned about his course of action to stop her, the officer said, “My only thought was to stop her. After all, she was waving a fire-arm.”