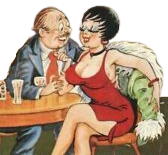 A man and a woman are sitting next to each other at a bar getting drunk.

The man turns to the woman and asks her why she’s so down.

“My husband just left me. He said I’m too kinky in bed,” she said.

“What a coincidence! My wife just left me,” said the man, “she told me that I was too kinky for her, too!”

The two talk a little while longer, and finding that they have so much in common they decide to go back to the woman’s house to have kinky make love.

When they get to the woman’s house she turns to the man and says, “Give me ten minutes, I want to slip into something more comfortable.”

However, as she is coming out of her bathroom, the man is putting on his coat and walking out the door.

“What happened?” She said, “I thought you wanted to have kinky lovemaking?”

He looks at her and says, “Well, I just bang your dog and shit in your purse. I’m done.”

A young teen aged girl was a call girl

A young girl went to her family doctor