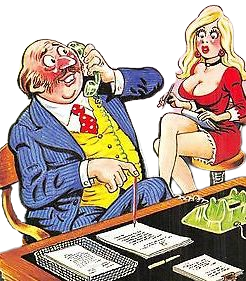 A married man decided to work late to be with his hot secretary, so he called his wife to make up an excuse.

After work he invited his secretary to dinner.

It soon became obvious that he was going to get lucky, so the two went back to her apartment and had great lovemaking for two hours.

Afterward the fellow went to the bathroom to straighten up for the trip home and noticed a huge hickey on his neck.

He panicked, wondering what to tell his wife.

After the man unlocked his front door, his dog came bounding to greet him.

Aha, the man thought, and promptly fell to the carpet, pretending to fight off the affectionate animal.

Holding his neck with one hand, he said, “Honey, look what the dog did to my neck!”

Hell, she answered, ripping open her T-shirt, “Look what he did to my melons!”

A female reporter was conducting an interview

A business man packing for a trip