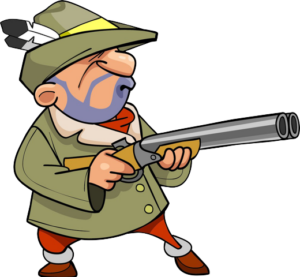 A Salt Lake pheasant hunter took his son to Idaho to do a little shooting but all the good fields they found were posted “No Trespassing.”

Being a law-abiding pheasant hunter (as surely all Utah pheasant hunters are) the man left his son by their car and went to a farm house to ask the farmer if they might hunt in his fields.

The Salt Lake hunter assured the farmer that no damage would be done to his fields or fences, and the farmer said he would allow the hunting of his fields, if the hunter would do him a favor.

“You see that old horse over there by your car? Well, he’s old and he’s got the miseries, But he’s sort of a family pet, and I can’t bring myself to shoot him will you shoot him for me?”

The hunter agreed, and as he was walking back to his car, he decided to play a joke on his son.

As he approached the car, his son asked, “Well, can we hunt the fields?”

The man, pretending to be angry, responded, “You know these farmers, they won’t let anybody hunt here it makes me so mad, I could….I could.”

The man picked up his gun and shot the farmer’s horse.

But to his surprise, he heard additional gunshots behind him.

He turned around and his son said, “You got his horse, I got his dog and cow now let’s get outta here!”

The Old Man Was Fishing In A Puddle