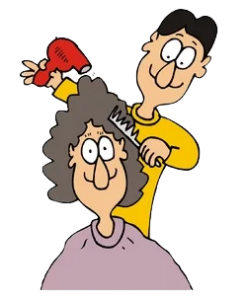 A woman was at her hairdresser’s getting her hair styled for a trip to Rome with her husband.

She mentioned the trip to the hairdresser, who responded.

Rome, Why would anyone want to go there? It’s crowded and dirty.

You’re crazy to go to Rome.

So, how are you getting there?”

That’s a terrible airline their planes are old, their flight attendants are ugly, and they’re always late

So, where are you staying in Rome?

“We’ll be at this exclusive little place over on Rome ‘s Tiber River called Testes.”

“Don’t go any further I know that place everybody thinks it’s gonna be something special and exclusive, but it’s really a dump.”

“We’re going to go to see the Vatican and maybe get to see the Pope.”

“That’s rich,” laughed the hairdresser you and a million other people trying to see him he’ll look the size of an ant.

He shot and dropped a bird