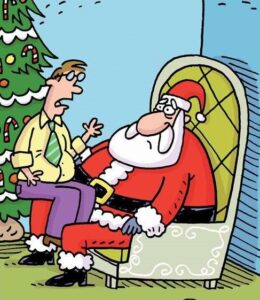 On Christmas Eve, the king invited the prime minister to join him for their usual walk together

He enjoyed seeing the decorations in the streets, but since he didn’t want his subjects to spend too much money on these just to please him.

The two men always disguised themselves as traders from some far distant land.

They walked through the center of the city, admiring the lights, the Christmas trees, the candles burning on the steps of the houses, the stalls selling gifts, and the men, women and children hurrying off to celebrate a family Christmas around a table laden with food.

On the way back, they passed through a poorer area, where the atmosphere was quite different.

There were no lights, no candles, no delicious smells of food about to be served there was hardly a soul in the street, and, as he did every year, the king remarked to the prime minister that he really must pay more attention to the poor in his kingdom.

The prime minister nodded, knowing that the matter would soon be forgotten again, buried beneath the day-to-day bureaucracy of budgets to be approved and discussions with foreign dignitaries.

Suddenly, they heard music coming from one of the poorest houses.

The hut was so ramshackle and the rotten wooden timbers so full of cracks, that they were able to peer through and see what was happening inside.

And what they saw was utterly absurd: an old man in a wheelchair apparently crying, a shaven-headed young woman dancing, and a young man with sad eyes shaking a tambourine and singing a folk song.

‘I’m going to find out what they’re up to,’ said the king.

He knocked the music stopped, and the young man came to the door.

‘We are merchants in search of a place to sleep we heard the music, saw that you were still awake, and wondered if we could spend the night here.’

‘You can find shelter in a hotel in the city we, alas, cannot help you despite the music, this house is full of sadness and suffering.’

‘It’s all because of me.’ It was the old man in the wheelchair who spoke.

‘I’ve spent my life teaching my son calligraphy, so that he could one day get a job as a palace scribe.

But the years have passed and no post has ever come up and then, last night, I had a stupid dream: an angel appeared to me and asked me to buy a silver goblet because, the angel said, the king would be coming to visit me.

He would drink from the goblet and give my son a job.

A old Man walked into the bank

Two Irishmen Are Lost At Sea