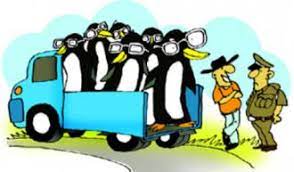 So a truck driver is driving through the country when he sees a penguin in the middle of the road.

He pulls over and looks around, but can’t see anyone.

So he picks up the penguin, puts him in the cab of his truck, and continues on his way.

A couple of miles down the road he gets pulled over by a cop.

The cop walks up to the truck and asks, “What are you doing with that penguin in your cab?”

The truck driver thinks for a second and says, “Well, he was just sitting in the middle of the road, so I decided to pick him up” to which the cop replied, “well ok, but what are you going to do with him now?”

Truck driver thinks for another second and says, “Well I was thinking I’d take him to the zoo.”

The cop shrugs his shoulders, tells the truck driver that’ll be fine and lets him go on his way.

A couple weeks later and the same truck driver with the same penguin is pulled over again by the same cop.

But this time the cop storms up to the truck and demands to know angrily,

“What are you still doing with that penguin? You said you were going to take him to the zoo?”

“I did” exclaimed the truck driver “that was two weeks ago, I’m taking him to the cinema today”

Nasreddin Hodja was lying in the shade