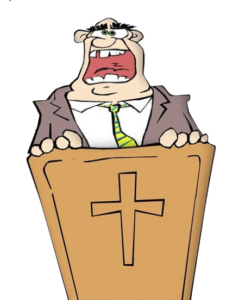 Juan always attended Sunday services at his parish but then he began to find that the pastor always said the same things, so he stopped going to church.

On a cold winter’s night two months later, the pastor paid him a visit.

“He must have come to try to convince me to go back,” Juan thought to himself.

He imagined he could not tell the real reason: those boring sermons.

He had to find an excuse, and as he was thinking he pulled two chairs up close to the hearth and began talking about the weather.

The pastor said nothing Juan, after some vain attempts to start up a conversation, sat in silence too they both sat there without speaking, just looking at the fire for close to half an hour.

Then the pastor rose, and with the help of a branch that had not yet burned, pulled an ember aside and placed it far from the fire.

The ember, without enough heat to go on burning, began to go out.

Juan quickly tossed it back into the middle of the fire.

“Good night and many thanks,” answered Juan.

“No matter how bright it is, an ember removed from the fire will end up going out quickly.

“No matter how clever a man may be, far from his neighbors he will never manage to conserve his heat and his flame.”

The devil decides to them a visit

I Just Gotta See This