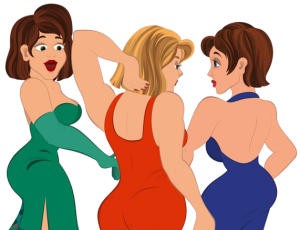 Three women worked in the same office with the same female boss.

One day, the women decided that when the boss left they would leave too.

After all, she never called or came back to work, so how would she know they went home early?

The brunette was thrilled to be home early.

She did a little gardening, had some playtime with her son and went to bed early.

The redhead was elated to be able to get in a quick workout at the spa before meeting a dinner date.

The blonde was happy to get home early and surprise her husband.

But when she got home, she heard a muffled noise coming from inside her bedroom.

Slowly and quietly, she cracked open the door and was mortified to see her husband in bed with her boss!

Gently, she closed the door and crept out of her house.

The next day, at their coffee break, the brunette and redhead said they planned to leave early again and they asked the blonde if she was going to go with them.

“No way,” she said, “I almost got caught yesterday!”

A female reporter was conducting an interview