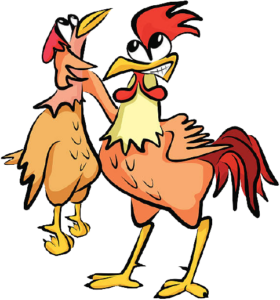 Two roosters fought for supremacy in the farmyard.

Finally one was vanquished and he went and hid himself in a corner of the hen-house.

The victor flew up to the roof of the barn and begin to crow,

An eagle swooped down and carried him away and the rooster that had been defeated suddenly found himself unchallenged master of the farmyard.

Moral Of The Story: The enemy is often defeated by his own pride.

A guy driving a Yugo

The cruise ship was sinking