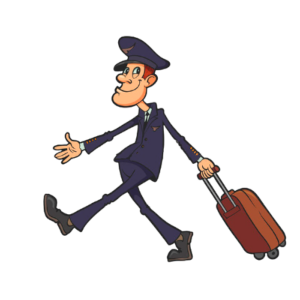 An airline pilot was scheduled to take a flight from New York to Los Angeles.

The weather was too bad in New York to allow his usual on time departure.

The weather in New York finally cleared and the pilot asked for his departure clearance.

He was very dismayed to hear that he had another delay due to the increased traffic now leaving New York.

Sometime later he finally received his clearance and decided he would try to make up the time lost by asking for a direct route to Los Angeles.

Halfway across the country he was told to turn due South knowing that this turn would now throw him further behind schedule he inquired, quite agitated, to the controller for the reason of the turn off course.

The controller replied that the turn was for noise abatement.

The pilot was infuriated and said to the controller, “Look buddy, I am already way behind schedule with all the delays you guys have given me today.

I really don’t see how I could be causing a noise problem for pedestrians when I am over 6 miles above the earth!”

The controller answered in a calm voice, “Apparently, Captain, you have never heard two 747’s collide!”

A horse and a goat

After swearing loyalty to the Captain