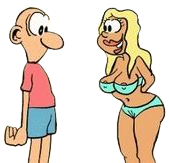 A boy takes his girlfriend home after going out together.

“Don’t worry, it will be quick, no problem.”

“At this time of the night? No one will show up…”

“Honey, it’s just a small blowier…I know you’d like it, too…”

At this moment, the girlfriend’s younger sister shows up at the door in her nightgown with her hair totally in disorder.

A Scottish lad and lass were sitting

A kid comes home from school