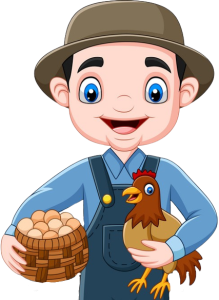 A farmer wanted to have his hens serviced, so he went to the market looking for a rooster.

He was hoping he could get a special rooster one that would service all of his many hens.

So the farmer took Henry back to the farm.

Before setting him loose in the hen house though, he gave Henry a little pep talk.

“Henry”, he said, “I’m counting on you to do your stuff.” And without a word, Henry then strutted into the hen house.

Henry was as fast as he was furious, mounting each hen like a thunderbolt.

There was much squawking and many feathers flying, till Henry had finished having his way with each hen.

But Henry didn’t stop there, he went in to the barn and mounted all the horses, one by one and still at the same frantic pace.

Then he went to the pig house where he did the same.

The farmer, watching all of this with disbelief, cried out, “Stop, Henry, you’ll kill yourself.”

But Henry continued, seeking out each farm animal in the same manner.

Well the next morning, the farmer looked out and saw Henry lying there on his lawn.

His legs were up in the air, his eyes rolled back, and his long tongue hanging out.

A buzzard was already circling above Henry.

The farmer walked up to Henry saying, “Oh you poor thing, look what you did, you’ve gone and killed yourself. I warned you big buddy.”

“Shhhhh,” Henry whispered, “The buzzard is getting closer.”

A radical feminist is getting on a bus