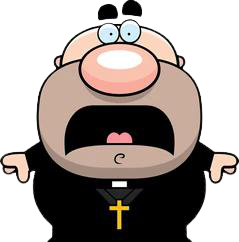 The Lawyer looks around shrewdly, grabs three freshly baked buns and quickly puts them into his pockets.

He says to the Priest, “That took great skill and guile to steal those buns the owner didn’t even see me.”

The Priest replied, “That’s just simple thievery, I’II show you how to do it the honest way and get the same results.”

The Priest then proceeded to call out to the owner of the bakery, “Sir, I want to show you a miracle of the lord.”

The owner was intrigued so he came over to see what the priest was talking about.

The Priest asked him for a bun, and then he proceeded to give it to a homeless-looking man outside.

He asked two more times, and after once again handing the buns out, the owner says, “Okay my friend, where’s the miracle?”

The Priest said, “Look in the Lawyer’s pockets.”

Two beggars live in a forest

A beggar was given a piece of bread