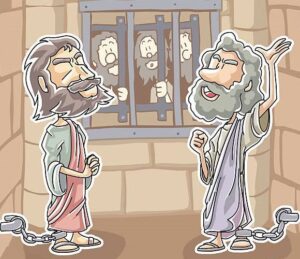 In ancient Greece there lived an old man (Cimon).

The old man was sentenced to hunger death, he was kept in prison.

The idea was to keep him hungry till he died.

His darling daughter who was lactating pleaded with the government to see him (Cimon) everyday at least until his death.

She was granted permission.

She was checked thoroughly by the prison officers to ensure she is not carrying any food for her father.

Pero couldn’t bear the sight of her dying father.

She looked at him with the eyes of of a caring father.

So, in order to save his life she gave him breast milk on a daily basis.

When Cimon was still alive after many days without food the government became suspicious of Pero.

On one occasion, the prison guards caught Pero  fronts feeding her father.

The case was filed against her but her selflessness and attitude won and turned the heart and mind of the jailer and he granted her father freedom.

The Lion & The Poor Slave