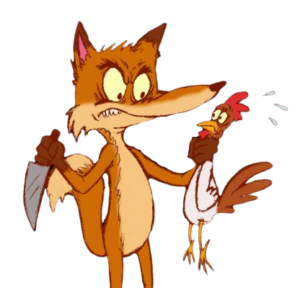 A fox sneaked into a farm and grabbed a prize rooster.

The farmer saw him and raised the alarm and he and his dogs started chasing the thief.

The fox, though he was holding the rooster in his mouth, was running very fast.

“Get him! Get him!” shouted “No!” suddenly screamed the rooster.

“My master was very cruel to me,” explained the rooster to the fox.

“Tell him to stay away from me.”

The fox was delighted

“He wants you to stay away from him!” he shouted at the farmer, releasing his hold on the rooster.

The rooster flew up into a tree and stayed there until he was rescued by his master.