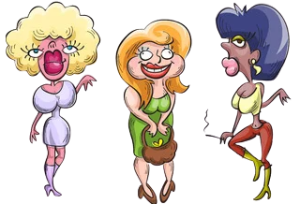 Three young women are at a cocktail party.

The conversation turns to their position in life, and it’s clear that they’re trying to one-up each other.

The first one says, “My husband is taking me to the French Riviera for two weeks on vacation,” and then looks at the others with a superior demeanor.

The second one says, “Well, my husband just bought me a new Mercedes,” and looks about with considerable pride. Young woman number three says, “Well, to be perfectly honest with you, we don’t have much money and we don’t have many material possessions. However, one thing I can tell you about my husband is that fourteen canaries can stand shoulder to shoulder on his self practice thing.”

After this, the first one looks shamefaced and says, “Girls, I’ve got a confession to make: I was just trying to impress you. You know that vacation I was telling you about? Well, it’s not to the French Riviera, it’s to my folks’ house in Terrie Hate for two weeks.”

The second one says, “Your honesty has shamed me. It’s not a Mercedes; it’s a Plymouth.”

“Well, I’ve got a confession to make myself: Canary number fourteen has to stand on one leg.”

This guy goes into a doctor

Dan was a single guy living at home