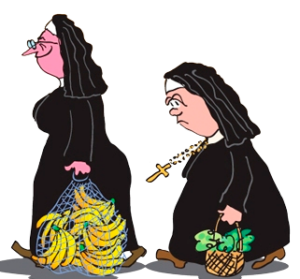 Two elderly nuns, Sister Dulce and Sister Andrea are on their way back from the market one evening.

It’s already very late, and they have quite a distance left before reaching their convent.

Sister Andrea glances over her shoulder, then whispers back.

“We’ll split up I’ll take the left road to the convent, and you take the one on the right.”

The nuns part ways, and a few minutes later, Sister Dulce arrives at the convent.

She starts pacing in front of the door, worried that some terrible fate has befallen the other nun.

Then, just as Sister Dulce is about to give up hope, she sees Sister Andrea running up the path.

“Well,” replies Sister Andrea, “I started running, and the man started chasing me.”

“He caught up to me.” Sister Dulce gasps.

“What did you do?!” “The only thing I could do,” Sister Andrea answers.

She got to the pearly gates