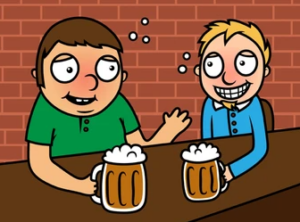 One sunny day, two men were sitting in a pub drinking pints of lager, when one turned to the other and said: “You see that man over there? He looks just like me! I think I’m gonna go over there and talk to him”.

So, he went over to the man and tapped him on the shoulder

“Excuse me, sir,” he started

The second man turned around and said: “Yeah, I noticed the same thing, where you from?”

The second man said: “Me too! What street do you live on?”

“McCarthy Street.” The second man replied: “Me too! What number is it?”

The second man replied in shock: “Me too! What are your parents’ names?”

The second man was awestruck and said: “Mine too! This is unbelievable!”

So, they bought another round and continued talking as the bartenders changed shifts

The new bartender came in, walked up to his colleague and asked:

The Murphy twins are drunk again.”

The Unfortunate Man At The Bar