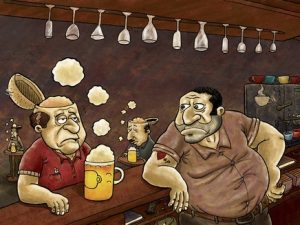 A guy walks into a bar and orders a beer.

He only brought enough money for one beer though.

As he’s drinking his beer, which was quite expensive, he realizes how bad he has to go to the bathroom.

Not wanting anyone to drink his expensive beer, he takes out a card and writes on it, “I spit in this beer”, and walks to the bathroom.

When he comes back about 15 minutes later, there’s another card next to his beer saying, “I spit in it too.”

A woman is alone at home