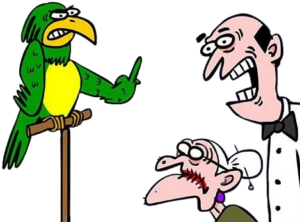 There once was a little old lady who wanted a parrot all her life.

Finally, one day she spots a good deal on a parrot for sale in the newspaper.

She makes the call and arranges to pick it up the next day.

In the meantime, out she goes to the pet store and buys the very best cage for him that money can buy.

The next day the little old lady brings her parrot home and puts him in the cage.

She watches him excitedly as he looks around his new surroundings and asks,

Well!!! The little old lady’s hair stood straight up! She opens the cage door, grabs the Parrot and shakes her finger at him.

Upon which she promptly throws the parrot back into the cage and slams the door.

A few days later, the little old lady was thinking about the incident, and she felt terrible.

After all, they were still getting to know one another; maybe she came down too hard on the poor parrot.

To make it up to him she goes to the pet store to buy him a present.

There she found a beautiful perch – top of the line – the very best perch that money could buy.

She rushes home as fast as she can and puts the perch in the cage – looking expectantly at the parrot;

“The parrot looks the perch over and says, dripping with sarcasm “nice f…n’ perch”.

WELL!!!!! The little old lady opens the cage, grabs the parrot and marches into the kitchen.

“I told you the next time I heard language like that out of your mouth there would be serious consequences”.

She promptly opened the freezer door and threw the parrot in, slamming it shut behind him.

An hour or so goes by and she thinks he’s probably learned his lesson.

Opening the freezer door, the parrot comes toddling out and says,

“One question; what the f…$ did the chicken do?”

A guy calls a company and orders