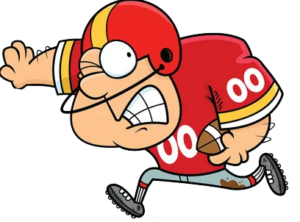 Larry, a local football star, is jogging down the street when he sees a building on fire.

A lady is standing on a third story ledge holding her pet cat in her arms.

“I play football, I can catch him.”

The smoke is pouring from the windows Finally, the woman waves to Larry, kisses her cat goodbye, and tosses it down to the street.

Larry keeps his eye on the cat as it comes hurtling down toward him.

The feline bounces off an awning and Larry runs into the street to catch it.

He jumps six feet into the air and makes a spectacular one handed catch.

The crowd that has gathered to watch the fire breaks into cheers.

Larry does a little dance, lifts the cat above his head, wiggles his knees back and forth, then spikes the cat into the pavement.