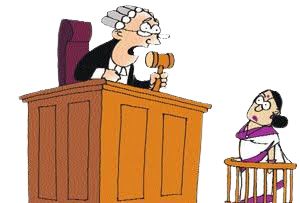 The prosecutor called his first witness, an elderly grandma, to the stand.

He walked up to her and asked, “Mrs Williams, do you know who I am?”

She answered, Of course I know who you are, Mr Rawley.

I’ve known you since you were a little boy, and honestly, you’re a disappointment.

You lie, you cheat on your wife, you manipulate people and talk behind their backs.

You think you’re some kind of big shot, but if you had half a brain you’d realize that you’ll never amount to anything but a mediocre pencil-pusher.

Oh, I know who you are all right.

The prosecutor had his jaw on the floor.

Shocked and looking to deflect the attention, he pointed across the room and asked: “Mrs Williams… do you know who the defense attorney is?”

She replied, Of course I do. I’ve known Mr Carbuncle ever since he was a child.

He’s a lazy bigot who has a problem with alcohol abuse.

He is unable to maintain a normal relationship with anyone, and is one of the worst lawyers in the county.

On top of that, he cheated on his wife with three different women, one of which was your wife.

Yes, I know exactly who he is.

The defense attorney looked like he was about to have a stroke.

The judge ordered the prosecutor and the defense attorney to approach, and whispered to them in a low but frantic voice,

“If any of you brats ask her if she knows who I am, then I’ll put both of you behind bars for life!”

A very shy guy goes into a bar

A cop notices how fast he is going