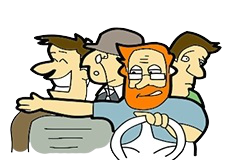 Three drunks get into a taxi and tell the driver where to go.

The driver has an idea of the address so he starts the engine, waits a few seconds and turns off the car.

The first drunk tips him £10 and gets out.

The second drunk tips him £20 and gets out.

The third drunk then slaps the driver across the face.

Worried that the drunk had realized the car hadn’t moved an inch, he asks the drunk, “What was that for?”

The drunk says, “Control your speed next time. You almost killed us!”

A tornado hit a farmhouse