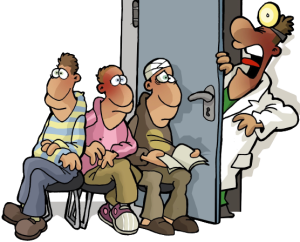 Three guys are in a doctor`s office.

One is a drunk, another`s a smoker and the third`s a gay guy.

The doctor tells each of them that, if they indulge in their bad habit one more time, they will die.

Outside they pass a bar.

The drunk goes into the bar takes a drink and, sure enough, he drops dead.

Meanwhile the smoker and the gay guy are walking along.

Then the smoker spots a lit cigarette on the sidewalk.

The gay guy looks over and says, “If you bend down to pick that up, we`re both dead.”

Two lawyers are having a drink

A man is traveling through the jungle