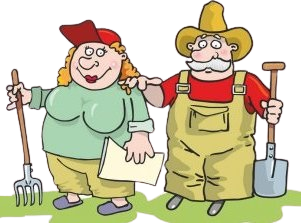 An aged farmer and his wife were leaning against the edge of their pig-pen when the old woman wistfully recalled that the next week would mark their golden wedding anniversary.

“Let’s have a party, Homer,” she suggested.

The farmer scratched his grizzled head.

“Gee, Ethel,” he finally answered, “I don’t see why the pig should take the blame for something that happened fifty years ago.”

A husband and wife were driving through

Husband in bed with another woman