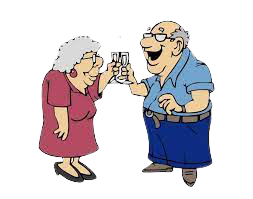 An elderly couple was celebrating their sixtieth anniversary.

It was not locked, so they entered, and found the old desk they’d shared, where Jerry had carved I love you, Sally.

Jerry said, We’ve got to give it back.

She put the money back in the bag and hid it in their attic.

The next day, two police officers were canvassing the neighborhood looking for the money, and knocked on their door pardon me, did either of you find a bag that fell out of an armored car yesterday?

She hid it up in the attic.

The agents turned to Jerry and began to question him.

One said: Tell us the story from the beginning.

Jerry said, Well, when Sally and I were walking home from school yesterday.

A man calls home to his wife