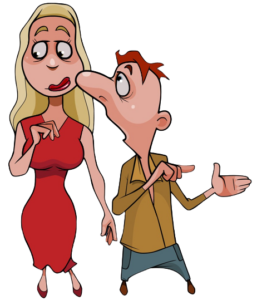 A husband and wife decide on a code language whenever they feel like having make love to escape the attention of their son.

According to the code language, the wife will be the typewriter and the husband will act as the typist.

However, they had a petty quarrel a few days ago and were not talking to each other.

One day the husband gets into the mood and he can’t hold any longer.

So he sends a word to his wife through the son.

The son comes and tells her, “Mom, dad wants to use the typewriter.”

The wife was having her monthlies at that time and she thought for a while and said, “Tell dad, he can’t because the red ribbon is on now,” she said.

However, the husband misunderstands that it was a deliberate excuse on her part.

Next day the son comes to his dad on an errand from his mom this time and tells him, “Dad, mom said it is okay now; the red ribbon is removed and you can type.”

The husband then tells his son, “Tell your mom I don’t need to type now. It was urgent, so I’ve already written with my hand!”

The husband finds a box

The husband picked up the phone