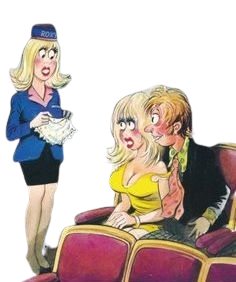 A man took his wife to a Broadway show.

During the first intermission he had to use the bathroom in the worst way, so he hurried to find the bathrooms.

He searched in vain for the rest rooms, but instead, all he found was a beautiful fountain with foliage.

Nobody was watching, so he decided to take a go right there.

When he finally got back into the auditorium, the second act had already begun.

He searched in the dark until he found his wife.

“Did I miss much of the second act?” he asked.

A married couple in their early

A young Japanese girl had been taught