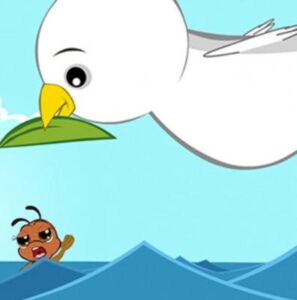 Once upon a time a river ran through a green field.

There lived an ant beside the stream.

One day the ant went to stream to drink water.

While drinking water, suddenly the ant fell into the running water.

“Help! Help!” shouted the ant but no one heard him.

A dove was sitting on a tree near the stream and saw the miserable condition of the ant.

The dove felt pity very quickly the dove broke off a wide leaf and throw nearer to the ant.

What a lucky escape!

After a few days the ant was looking for food beside the stream.

He stood still hearing the cooing of a dove.

The ant saw that it was the same dove that saved his life.

It was very happy to see the dove and wanted to show his gratefulness by waving but of no use.

Then to his utter horror he found a hunter carrying a bow and an arrow.

The hunter quietly drew took his gun and aimed at the dove.

Just at that moment the ant bit very seriously on the hunter’s leg.

So, the hunter’s aim failed and it hit a branch of the tree.

The dove flapped her wings and flew off in a hurry.

The hunter bent down to look

There was a tiny red mark on his leg.

And the ant? It was nowhere to bee seen!

A Samurai who was known

A teacher in New York