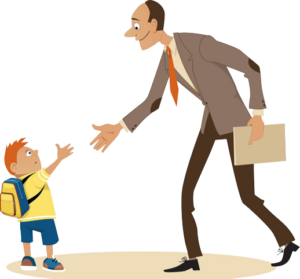 A teacher in New York decided to honor each of her seniors in high school by telling them the difference they each made.

Using a process developed by He-lice Bridges of Del Mar, California, she called each student to the front of the class, one at a time.

First she told them how the student made a difference to her and the class.

Then she presented each of them with a blue ribbon imprinted with gold letters which read, “Who I Am Makes a Difference.”

Afterwards the teacher decided to do a class project to see what kind of impact recognition would have on a community.

She gave each of the students three more ribbons and instructed them to go out and spread this acknowledgment ceremony.

Then they were to follow up on the results, see who honored whom and report back to the class in about a week.

One of the boys in the class went to a junior executive in a nearby company and honored him for helping him with his career planning.

He gave him a blue ribbon and put it on his shirt.

Then he gave him two extra ribbons, and said, “We’re doing a class project on recognition, and we’d like you to go out, find somebody to honor, give them a blue ribbon, then give them the extra blue ribbon so they can acknowledge a third person to keep this acknowledgment ceremony going then please report back to me and tell me what happened.”

Later that day the junior executive went in to see his boss, who had been noted, by the way, as being kind of a grouchy fellow.

He sat his boss down and he told him that he deeply admired him for being a creative genius.

The junior executive asked him if he would accept the gift of the blue ribbon and would he give him permission to put it on him.

His surprised boss said, Well, sure.

The junior executive took the blue ribbon and placed it right on his boss’s jacket above his heart.

As he gave him the last extra ribbon, he said,

“Would you do me a favor? Would you take this extra ribbon and pass it on by honoring somebody else? The young boy who first gave me the ribbons is doing a project in school and we want to keep this recognition ceremony going and find out how it affects people.”

That night the boss came home to his 14-year-old son and sat him down.

Nasreddin Hodja, having need for container