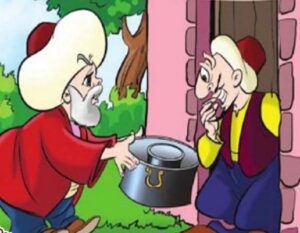 Nasreddin Hodja, having need for a large cooking container, borrowed his neighbor’s copper cauldron, then returned it in a timely manner.

“What is this?” asked his neighbor upon examining the returned cauldron.

“There is a small pot inside my cauldron.”

“While it was in my care your cauldron gave birth to a little one because you are the owner of the mother cauldron, it is only right that you should keep its baby and in any event, it would not be right to separate the child from its mother at such a young age.”

The neighbor, thinking that the Hodja had gone quite mad, did not argue.

Whatever had caused the crazy man to come up with this explanation, the neighbor had a nice little pot, and it had cost him nothing.

Some time later the Hodja asked to borrow the cauldron again.

“Why not?” thought the neighbor to himself.

“Perhaps there will be another little pot inside when he returns it.”

But this time the Hodja did not return the cauldron.

After many days had passed, the neighbor went to the Hodja and asked for the return of the borrowed cauldron.

“My dear friend,” replied the Hodja.

“I have bad news

Your cauldron has died, and is now in her grave.”

“What are you saying?” shouted the neighbor a cauldron does not live, and it cannot die return it to me at once!”

“One moment!” answered the Hodja.

And the neighbor never again saw his cauldron.

A teacher in New York

The best positions for prayer