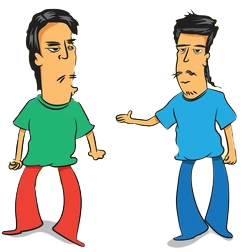 Two Polish guys were taking their first train trip to Warsaw on the train.

A vendor came down the corridor selling bananas which they’d never seen before. Each bought one.

The first one eagerly peeled the banana and bit into it just as the train went into a tunnel.

When the train emerged from the tunnel, he looked across to his friend and said, “I wouldn’t eat that if I were you.”

“I took one bite and went blind for half a minute.”

Two man were sitting in a bar

A little guy gets on a plane