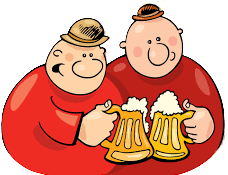 Two man, one American and an Indian were sitting in a bar drinking shot after shot.

The Indian man said to the American, “You know my parents are forcing me to get married to this so called homely girl from a village whom I haven’t even met once. We call this arranged marriage.

I don’t want to marry a woman whom I don’t love… I told them that openly and now have a hell lot of family problems.”

The American said, “Talking about love marriages… I’ll tell you my story.

I married a widow whom I deeply loved and dated for 3 years.

After a couple of years, my father fell in love with my step-daughter and so my father became my son-in-law and I became my father’s father-in-law.

My daughter is my mother and my wife my grandmother.

More problems occurred when I had a son.

My son is my father’s brother and so he is my uncle.

Situations turned worse when my father had a son.

Now my father’s son i.e. my brother is my grandson.

And you say you have family problems?”

He goes to a witch in the woods