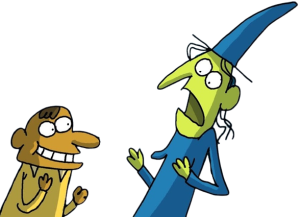 There is this guy who has a 25 inch weapon.

He goes to a witch in the woods and asks her if she can make his weapon smaller because he just can’t please the ladies because it is just too big, he hasn’t found a lady yet who likes it and he can’t get any pleasure.

She tells him to go into the woods and he will find a frog when he finds the frog he is to ask it to marry him.

If the frog says ‘no’, his tool will shrink 5 inches.

He goes into the woods and finds this frog.

The frog says, “No”, and his prick shrinks five inches.

The guys thinks to himself, “Wow, that was pretty cool. But, it’s still too big.”

So he goes back to the frog and again asks the frog, “Frog, will you marry me?”

But that’s still 15 inches and he thinks his chop is still just a little bit too big.

But he thinks that 10 inches would be just great.

He goes back to the frog and asks, “Frog, will you marry me?”

A young lady meet a man in a pub

Two man were sitting in a bar